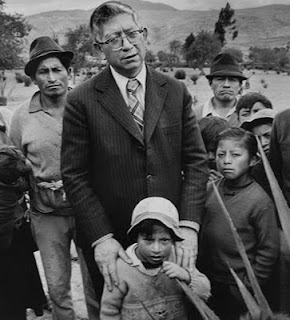 “Leonidas Proaño Eduardo Villalba, pastor and prophet of the new evangelization in Latin America, dedicated his life to constantly strive to introduce social justice in relations with the Indians, and their access to public life and political power,” Ecuavisa reports.

“The Ecuadorian priest and theologian, Bishop of Riobamba (1954-1985) and candidate for the Nobel Peace Prize died at 78 years old, and is remembered for his followers because he could simply come and walk and learn from them to share the word and bread. He was born on January 29, 1910 in San Antonio de Ibarra, Imbabura Province. There, in the heart of the province with a high percentage of indigenous population of Ecuador, in contact with the reality of his people, he discovered the Lord’s call to dedicate his life to serving the poor, denouncing their oppression and announcing the Good News of the Gospel.”

Meanwhile, Roberto Morales Almeida, journalist and historian, a pioneer of the Sociedad Cardijn a close collaborator of Bishop Proaño, died on 23 August 2013, El Comercio reports. Almeida was editor of the newspaper La Verdad, founded by Bishop Proaño in 1944 but which has now ceased operation.