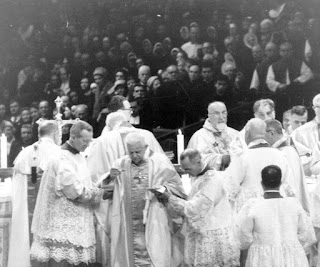 “’Vatican II canonised Cardijn,’ I remember late Melbourne Archbishop Frank Little saying as he regaled us with his story of meeting the YCW founder while studying in Rome,” writes Stefan Gigacz.

“What’s more there was a whole generation of Australian bishops and priests, who told similar stories, starting with his predecessor Archbishop Justin Simonds, and including Brisbane Archbishop Frank Rush, Adelaide’s James Gleeson, Perth’s Redmond Prindiville and many others.

“Archbishop Little’s message stayed with me, and was later reinforced by a biography of Cardijn by his co-workers, Marguerite Fievez and Jacques Meert, that detailed his role at the Council in promoting the specific task of the laity as the building up of the world.

“So in 1995, when I began doing research on the origins of the International Young Christian Workers movement, I looked forward to the publication of the first volume of a major History of Vatican II.

“But after forking out over $100 for Volume I, I reached for the index – only to be deflated to find not a single mention of Cardijn.”

The saint at Vatican II (CathNews)

CCI is this year launching its 50th anniversary of Vatican II program with a conference “Vatican 2 + 50: A Cardijn Perspective” to be held in Manila, Philippines from 11-14 October 2012.