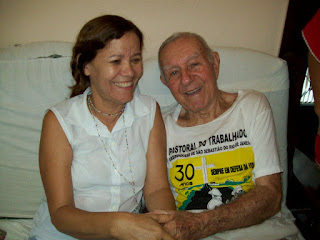 Former Brazilian YCW leader, Tibor Sulik, who later became a founding member of the Commission for Justice and Peace of the Brazilian Catholics, has died at the age of 85.

Tibor who was born on April 27, 1927 in Trnovec nad Váhom in what is now the Slovak Republic, died on Tuesday, Jan. 15, at his home in Rio de Janeiro.

“A tireless defender of democratic freedoms, he was arrested by the military regime in 1964,” says the website of the Archdiocese of Victoria do Espiritu Santo, ” but he continued his deep connection to the working world and in building a fair and caring society, always inspired by the social teaching of the Church.”

“His modesty and simplicity did not subtract from his dimension as an international leader, or his commitment to raise awareness and Christian hope in the minds and hearts of thousands of young workers.

“With the death of Tibor Sulik, we lose a militant Christian worker model, eg for different generations, of whom I am glad to have had as a friend and international leader model, and who had a fruitful life, consistent in thought and action.”

“CCI also remembers Tibor, particularly from his participation at the YCW History Colloquy in Brussels in May 2000,” said convenor Stefan Gigacz.

“We send our condolences to his wife Lydia and family.”

In Solidarity with the People of the Philippines