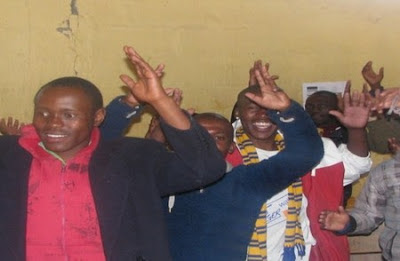 South African YCS leaders marched in a June 16 procession for Africa Child Day commemorating the beginnings of the Soweto Uprising against the former apartheid regime in 1976.

The procession where the youth carried placards and sang different songs, began at Mohale’s Hoek high school via Likhutlong, Thoteng and Moeaneng villages, St Stephen’s high school to the main street and back to the starting point where speeches were made.

Speaking at the event, the District Administration Manager, Diteboho Monese, said the day calls on the youth to take initiative to effect changes in issues that concern them.

He said, now the country is heading towards Local Government elections, the youth are expected to fully participate in such activity, while at the same time ensure that their aspirations are incorporated in the national development plan.

YCS President, Ramothamo ‘Nyane, said South Africa gained freedom through influence by the youth learners, adding that youth learners in Lesotho can effect change as well in the country.

He said the day’s commemoration is held in support and cognisance to struggle acts against apartheid by South African youth in June 16 1976. ‘Nyane called on the youth to stand up in arms against corruption to eradicate poverty as a number one Millenium Development Goal (MDG), which he said when not addressed, it would be difficult to achieve other goals.

He commended the government for progress made towards achieving universal primary education though he expressed concern about what will happen beyond primary level. The President of Lesotho Youth Federation (LYFE), Nts’ekhe Tlaba, said there is still hope that the youth will influence the government to give education cognisance it deserves as a right to every person.

He urged the youth to work as a team to address problems they are faced with and influence that the MDG’s should be attained. The African Child Day is commemorated annually in several African countries on June 16.

Lessons from a township that resisted apartheid