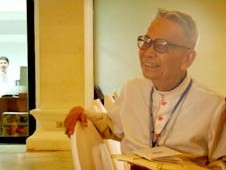 “During the coup d’ etat in 1992, Bishop Bunluen pushed the Thai Church to declare its position on solving political problems by peaceful means and with respect for people’s human rights. Before this, the Thai Church had always been quiet on these matters,” recalled Rakawin Leechanavanichpan, former coordinator of the justice and peace commission.

Bishop Mansap had even earlier this year called on the government and “red-shirt” demonstrators to renew talks after violent clashes left several people dead and hundreds injured.

“What endangers the country is not civil war, it is anger and hatred, and there seem to be lots of people with hatred today.” He urged all Thais to accept different opinions and beliefs. “All humans have the potential to love each other but are divided by politics and ideology,” he said.

The so-called “red shirts,” a loose coalition of political activists and supporters of ousted premier Thaksin Shinawatra, have been encamped in Thailand’s capital for nearly a month. They claimed the government of Abhisit Vejjajiva is illegitimate and were calling for the immediate dissolution of parliament and early elections.

Born in 1929, the bishop was ordained a priest for Ratchaburi diocese in western Thailand in 1951. As a young priest, he was interested in social development ministry, but he became actively involved only from 1965.

He served as secretary of the Office for Human Development of the Federation of the Asian Bishops´ Conferences from 1974 to 1976, the year he was ordained a bishop. From 1978 to 1984 he was chairman of the same office.