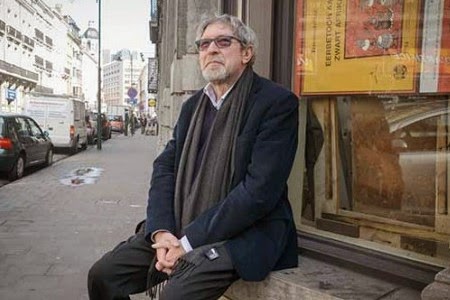 “Our grandparents had to fight for a health service, union privileges. Young people today also need to take their fate in their own hands,” says Belgian trade union leader Guy Tordeur, who is also the postulator in the cause for canonisation of Joseph Cardijn.

Read a Google English translation of the full interview below

Guy Tordeur, Postulator in the beatification process of Joseph Cardijn.

Behind the desk Guy Tordeur hang large pictures of the strike for the 45-hour week in 1955, of the murdered mgr. Oscar Romero and of a landless peasant girl in Brazil.

Until the end of this year Tordeur ACV union secretary of Brussels-Halle-Vilvoorde, a task which he combines with that of postulator of the beatification of Joseph Cardijn recently.

‘The other belittle makes you certainly not bigger ”

Some street names are closely associated with institutions. In Brussels Pletinckxstraat for Christian pillar. Once stood here the German mission, which in 1918 was caught and passed into the hands of Joseph Cardijn and his Christian Social Work.

In that place now works Tordeur Guy pointing at the plaque for a deported by the Nazis predecessor. “We should not think that the social struggle is won forever.”

– How did you help to look after?

Cardijn’s beatification process I myself had never thought of. The demand to participate in the beatification process of Cardijnplein the lead comes from other continents, but the procedure had to take place in the Archdiocese of Mechelen-Brussels. Cardijn I did not know personally, because in 1963 I saw him once, and only from afar. In Halle, where he grew up, we launched a group called the former kajotters association Cardinal Cardijn, to keep his work. Award alive. It was the International Community that Cardijn me by Msgr. Leonard recited as postulator. He agreed and asked me to install it. Ecclesiastical court It is a rigorous process. The first part consists of collecting testimonies and historical research.

– Do you consider yourself as an heir of Cardijn?

The kajotters (YCW members) I learned on my fifteenth know thanks to a priest at St. Roch Parish in Halle. From Cardijn I got especially his famous method of seeing-judge-act with it, as well as his attention to young people who have fewer opportunities. For Cardijn was everyone “child of God”. The mass movement of young workers is no longer there, but here in Brussels are still working brave nuclei of KAJ (YCW) who care about the youth and the rights of young people in temporary work.

If you have received a lot of you have a lot of passing. Nineteen years ago, I was elected union secretary. I learned a lot in the labor movement, such as listening carefully. However, I also got the faith with the malleability of society. By team form, you can change the world. Hence my great admiration for Sister Jeanne Devos. The plight of domestic workers is due to its commitment today advocated at the highest international level. In Brussels, I am involved in the operation of the team of the Begijnhof Church, with Father Daniel, app dedicated to undocumented workers. In the beatification process, we will have to talk about miracles. But what are miracles? Cardijnplein brought many in motion. In the Gospel it is called that lame start walking.

– You stood at the cradle of the action “Save the solidarity against the division of social security. You got the Prize for Democracy for. Did that fight also face inspiration?

Our social security system is the parapet for whom it is difficult. In countries such as El Salvador, I saw what a society with no or weak social security bodies. Sick, there may be no medical care afford. Even today, there is a need for people who oppose individualization, against I-society. The other belittle, makes you really not bigger.

– Cardijn’s episcopal motto heralded “Evangelizare pauperibus”, proclaiming the Good News to the poor. What does that mean today?

We must dare to dream structures casting. A fairer society everyone better. I conducted collective bargaining and resolved to always explicitly show respect for the patrons. You only get respect when you showing self-respect.

– You not only dwells on Cardijn’s workplace also has double roots in common with him: Halle and Brussels. Does that mean anything?

I was born in Anderlecht, Cardijn in Schaerbeek. And like him, I grew up in Halle. Brussels I see no way a threat. With its diversity and multilingualism, rather I see our capital as a challenge. Brussels is like a diamond. Net the many facets make the city sparkle. In Brussels, I met a lot of nice people. Of course, the city also has its raw edges, but it is my belief that something good dwells in every human being. And if you do good feed, which grows into a man.

My deepest motivation is to live the core Cardijn’s legacy and help out. Society behind the man. Our grandparents had to fight for a health service, a union privileges … Young people are back to challenge their fate to take in their own hands. Only they miss today Cardijn, I think.