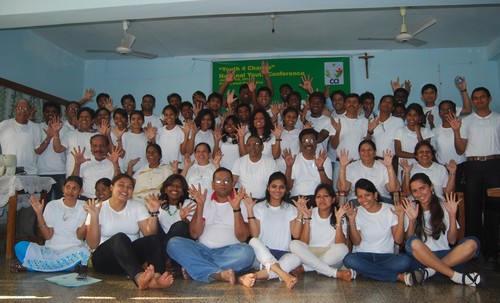 We are happy to announce that the first CCI event of 2011 has been a great success.

CCI India has just completed its Youth for Change National Conference in Goa. Read the report and the Goa Declaration here.

“Fantastic response,” Ruben writes.” Never expected the youth to be so responsive and attentive.”

This year is also another year of Cardijn centenaries. In a few months, we will mark the hundredth anniversary of Cardijn’s visit to London to meet the English trade union leaders, particularly Ben Tillett of the Dockers Union who had so much impact on his conception of the future YCW.

Read Cardijn’s report of this momentous trip here in English or here in the original French.

There will be some major events for CCI coming up this year, notably our 10th centenary of our foundation as the Cardijn Liaison Committee at a Network for Development conference in Bangkok in July 2001.

We plan to celebrate this anniversary and make plans for the coming years at our International Forum and General Assembly once again in Bangkok on 23-24 July 2011. More details here and hope you can join us.

Also coming up this year is a major conference to be held by the Cardijn Community Australia to be held in Melbourne from 4-6 November at the Archdiocesan Centre and the Catholic Theological College. We will have publish more details as they become available.

Latest items on our Cardijn Resources website include a link to a video of the 1957 Pilgrimage to Rome made by British Pathe.

Also published on the Cardijn Documents site is Cardijn’s 1956 speech to English and Welsh YCW chaplains, Quaerite Primum – Seek First. It is a tour de force of Cardijn’s basic philosophy and method and is one of the few published texts that were originally delivered in English.

Here also is a link to the announcement by Marc Sangnier of the closure of Le Sillon, the magazine of the French Sillon movement, which was the major precursor to the Cardijn movements. It was the closure of the Sillon which opened the door to the emergence of the YCW.

What Cardijn thought about all this can also be found in this short article, 25 août: L’héritage du Sillon et la JOC, that I wrote for the French magazine, Les Cahiers de l’Atelier.

Meanwhile, all the best for 2011 from the CCI Team.

for the CCI Team

A new youth program in Cardijn’s home parish of Laeken