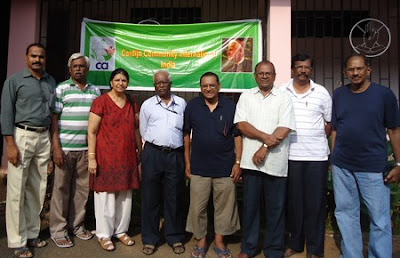 CCI-India will launch a national study of internal migrant workers, a media training program and the creation of a Cardijn Media company, the National Team has announced following its meeting at Trichur, Kerala this week.

The 15-17 May meeting undertook an extensive review of the movement’s activities in India and the steps taken since the National Council in November 2011.

CCI Secretary General MJ Ruben reports that the team adopted a multi-pronged approach to build CCI in India and to promote Cardijn, including the following:

1. A survey on the living and working conditions of internal migrant workers:

To be undertaken in 6 phases viz. (i) Finalisation of the objective and guidelines; (ii)data collection; (iii)analysis of data collected; (iv)consultation to discuss the outcome of the survey and to plan action with the field workers, experts, sociologists, organisations working on migrant issues and CCI leaders and animators; (v)publication of the survey and the last phase (vi) will be the action part (representation, lobbying and sensitization on the issue).

SPSS (Statistical Package for Social Sciences) tool will be used for formulating guideliens and analysing the data collected.

Two fulltime workers from CCI will be appointed for two to three months to conduct the survey in 6 major cities in India (Chennai, Mumbai, New Delhi, Pune, Bangalore and Hyderabad).

It was also decided to register Cardijn Media as a company. Six people have already agreed to subscribe for 10,000 rupees of shares.

Under the proposed statutes, 50 per cent of any profits will be donated to CCI.

Among other decisions CCI – India formally decided to affiliate with the Cardijn Community International.

It was also decided to open up for individual memberships with an undertaking by new members to endeavour to launch new CCI teams in their local areas within twelve months of their joining.