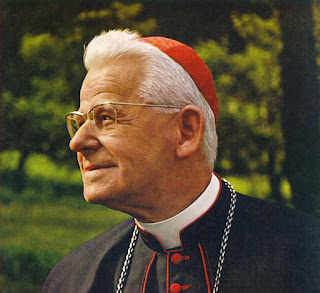 Today is World Youth Day 2011. Over one million young people from around the world are gathered on the outskirts of Madrid, Spain to celebrate the event with Pope Benedict XV.

It’s a great day also to launch the online publication of the Marguerite Fievez and Jacques Meert biography of Joseph Cardijn.

First published in French in 1969, the English translation by the late Fr Edward Mitchinson came off the presses in 1974. The biography has thus been effectively out of print for the last 30 years or so.

In recent years, it has become possible occasionally to find a second hand copy at an online bookshop.

However, now we are proud to again make available this important biography to the whole English speaking world.

With Fernand Tonnet and Paul Garcet, Jacques Meert was one of the famous “founder trio” of the YCW. He worked with Cardijn from the age of 18.

Marguerite Fievez became a YCW leader in the 1930s, and from 1945 was effectively the first secretary-general of the IYCW, a post she held until 1957 when the first official International Council was held in Rome.

From 1957, she became Cardijn’s personal assistant until his death in 1967 after which she devoted the next 20 years of her life to compiling his personal archives which are now held in the Royal Archives of Belgium. From then on until her death in 2000, she worked on the archiving of the records of the JOC in Belgium as well as those of the IYCW.

Thus this biography of Cardijn is the personal record of two people who worked side by side with Cardijn from 1919 until his passing in 1967.

Moreover, it is also a scientifically written history since Marguerite and Jacques chose to work with the historian Professor Roger Aubert  from the Catholic University of Louvain in compiling their history.

As the authors say in the introduction, it is only the “first biography” of Cardijn and much more remains to be rewritten.

Nevertheless, it is also an irreplaceable almost eye-witness account of his life.