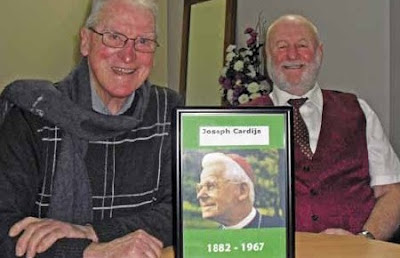 Cardijn Community Australia founder, Kevin Vaughan, is raising awareness of of the importance of fatherhood and supporting men separated from their children.

Kevin says the fact that so many children in our community are raised without their dad is a tragedy not only for the children, but also for their fathers, since, “there is a natural love between a father and his children”, Kairos magazine reports.

Three years ago Kevin started a Cardijn group in his parish at St Anne’s, Seaford in Melbourne’s south.

The group became interested in tackling the issue of fatherless families when parish priest Fr John Madden alerted members to the fact that 42 children from single-parent families within the parish were getting breakfast only three times a week.

The group attempted several initiatives, including setting up a scheme whereby men could become male role models for fatherless children in the parish.

Kevin says: “We came to the conclusion that the best male role model for a child is the child’s father.”

The group then began to focus on why separation happens and ways to support those who want to remain part of their children’s lives or reconnect
with estranged children.

Kevin also started working with Fr Peter Carrucan at St Augustine’s Church in the city centre of Melbourne where he has started a drop-in centre fro separated dads.

“One guy told me he hadn’t seen his children for 11 years,” Fr Peter said. “Then, out of nowhere comes a letter from his daughter, who was 10 when he last saw her, inviting him to her 21st birthday so he is delighted. I think some men listen to the wrong voices. They put off contacting their children.

“Maybe it is fear that they might be rejected.”

Supporting separated dads (Kairos, August 2011)
fr Carrucan (left) and Kevin Vaughan with a picture of Cardinal Cardijn. Kevin belongs to a Cardijn group in his parish
of St Anne’s, Seaford.

The benefits of fair trade chocolate